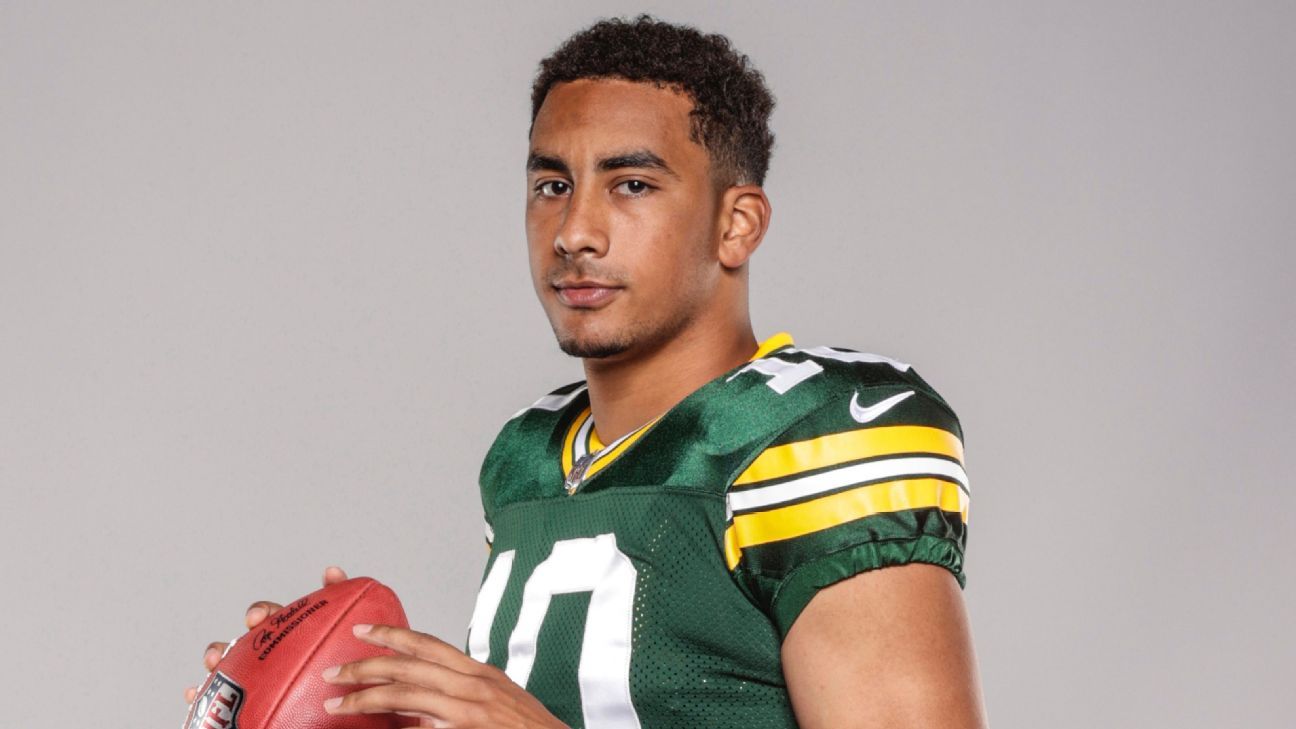 We got a look at some high-profile rookies in their new uniforms on Friday. That included first-round picks Joe Burrow, Jordan Love and Jerry Jeudy.

Plus, Kyler Murray got in some work in the Arizona heat — it’s a dry heat, right? — and we got a behind-the-scenes look at how some teams are keeping their players and staff safe in the time of COVID-19.

Here’s what you need to know from camps across the league:

Jump to the best of the day:
Photos | Videos | Notes from NFL Nation reporters

Top news of the day

Brown had been the subject of an NFL investigation following an accusation of sexual misconduct at his home by an artist who was working there in 2017. He also pleaded no contest in June to a felony burglary with battery charge and two lesser misdemeanor charges related to a January incident with a moving truck company outside his home in Hollywood, Florida. In announcing the suspension, the NFL said that Brown was directed to continue counseling and treatment. The league also said that any further violations would likely result in harsher discipline.

Ryan Clark discusses whether teams will take a chance on Antonio Brown now that he has been given an eight-game suspension.

Houston Texans coach and general manager Bill O’Brien on Friday said the team is “working hard” with quarterback Deshaun Watson‘s representatives on a contract extension, and that “we want him here for a long time.” Watson, a first-round pick in 2017, was eligible for a contract extension for the first time this offseason. He made less than $3.8 million in 2019, which was just 4.88% of the Texans’ cap. He is scheduled to make $4.4 million during the 2020 season.

All-Pro defensive end Cam Heyward would like to retire as a Pittsburgh Steeler but is concerned that might not happen due to a lack of movement on a contract extension. Heyward enters the final year of his deal, and there have been no substantive contract discussions between the Steelers front office and Heyward’s agent, Michael Perrett of Element Sports Group.

“I thought we’d be further along in the process. In a normal year, we might be,” Perrett told ESPN. “The current situation (with the pandemic) has led to a lot of uncertainty, but NFL business is still moving forward. Cam would love to retire a Steeler, but at this point, he just doesn’t know how all of this is going to play out.”

Cincinnati Bengals rookie quarterback Joe Burrow isn’t shy about accepting the expectations thrust upon his shoulders this offseason. If and when the season begins, Cincinnati wants the top overall pick in the 2020 draft to come and be successful immediately. In his first news conference since the Bengals selected him, Burrow said he shares the same aspirations in his first season in the NFL.

“Going into my rookie year I expect to play well and I expect to win a lot of games,” Burrow said when asked about reflecting on recent success that includes a Heisman Trophy and a national title. “If I look back now, I’m doing myself a disservice and the team a disservice.”

Detroit Lions safety Jayron Kearse has been suspended three games by the NFL for violation of its substance abuse policy. Kearse, 26, signed with the Lions in March after four seasons in Minnesota, where he played in 62 games with five starts, making 79 tackles and defending eight passes.

Kearse was charged with DWI and carrying a firearm without a permit last October, when he was with the Vikings. Kearse apologized for his actions back in October, saying the arrest is “not a reflection of who I am as a person.”

What our NFL Nation reporters saw and heard today

Bill Belichick held his first media availability Friday since players and coaches reported for training camp, and the biggest takeaway is that he isn’t naming a starting quarterback. Over the last 18 years, while Belichick never named an official starter, there wasn’t much question who would be QB1 in New England. Now? “That spot is the same as all the other spots on the team,” Belichick said. “We have a long way to go. We’ll see how things turn out. I can’t control how players perform. That’s up to them. We’ll give everyone an opportunity and see what happens. I don’t know.” — Mike Reiss

Newly acquired safety Bradley McDougald — a.k.a. the other player in the Jamal Adams trade — said his goal with the Jets isn’t to become the next Adams, but to continue to play the way he did in Seattle. He said his strengths are versatility and pass coverage, adding, “I’ve had some success against some of the biggest-name tight ends in the game.” The Jets’ plan is to start him at strong safety. McDougal said all the right things in his Zoom call with reporters, not sounding bothered at all that he went from a perennial contender to the Jets. — Rich Cimini

The Ravens set the NFL’s all-time single-season record for rushing yards last season, but rookie second-round pick J.K. Dobbins still believes he can make an immediate impact. “I don’t know how patient I can be,” he said Friday. “My goal is not to be patient. I was not taught that in college. Don’t be patient; take advantage of your opportunities. [I’m] not saying that I’m going to start or anything, but I feel like if I just work hard enough and show the coaches that I can play at this level, then I’ll be on the field. My goal is to help the team win the Super Bowl, not sitting on the bench.” — Jamison Hensley

One of the great stories of training camp last year was 2018 fifth-round pick Cole Madison. He made the team after sitting out his entire rookie year to focus on his mental health. A year later, he won’t get that chance. He was waived on Friday. He likely wouldn’t have been ready to practice because of the recovery ongoing from the torn ACL he sustained in practice last November. — Rob Demovsky

Ball security is a point of emphasis for Carson Wentz this offseason after finishing with the second most fumbles in the league last year (16). He and the coaching staff have analyzed every one of those fumbles, and are anxious to finally get to work on it on the field. “You dive into it, try to figure out why it’s happening, how we can correct it, and what we can do to emphasize it as we go,” said QB coach/pass game coordinator Press Taylor. — Tim McManus

I guess the Mitchell Trubisky revenge tour officially kicked off today. We’ll see how long that tour lasts, but in the meantime, Trubisky told us today that he’s “out to prove everybody wrong” when asked about all the people that have written him off. Here’s the full quote:

“For me it’s very motivating. You’re always going to have people writing you off. It’s got to light a fire under you which it has for me and I’m just trying to prove everybody wrong and prove my teammates right. There is just so much hard work that goes into it. And for people who write you off, I mean, that definitely motivates you in a way that you just want to go out there and play as best you possibly can. So I’m definitely fired up. And I just … You’ve got to make it happen.” — Jeff Dickerson

No news is good news for the Panthers in terms of making it to Friday with no players on the NFL COVID-19 list. That paves the way for players to enter Bank of America Stadium this weekend, likely Saturday, and officially begin training camp in e revamped facility. Carolina also has had only one player, undrafted rookie Jordan Mack, opt out this season so far. First-year coach Matt Rhule hasn’t gotten many breaks in terms of preparing for this year, but this has to help his rebuilding effort. — David Newton

The Falcons now have five players on the reserve/COVID-19 list after adding starting defensive tackle Tyeler Davison and reserve quarterback Danny Etling to the list on Friday. Davison and Etling join safeties Jamal Carter and Jaylinn Hawkins as well as fullback Keith Smith. Sources indicated both Carter and Smith were asymptomatic and doing well, while the status of the other three is unknown. The Falcons are not allowed to comment on the players, meaning they can’t confirm which ones tested positive for the coronavirus or are under quarantine restrictions. The Falcons are set to begin conditioning work next week. — Vaughn McClure

After speaking with medical professionals prior to the start of training camp, the Bills figured positive tests were going to come, but after five positives in four days the team took preventative measures and sent players home Thursday, conducting the rest of their meetings virtually. Only rookies, quarterbacks and rehabbing players were in the facility this week, so the team sought to get out ahead of any potential outbreak before it happened. — Marcel Louis-Jacques

The Giants are one of the few teams going the 90-man roster route this year for training camp. That means they will be split into two groups for practices, weight training and pretty much everything until trimming their roster to 80 by Aug. 16. Coach Joe Judge revealed Friday that his quarterbacks, including Daniel Jones, will be in Group 1, which reported last week and consists of rookies, first-year players and previously injured veterans. This means that Jones and the rest of the quarterbacks room won’t be co-mingling with the veterans at least for a few weeks. Why? “For us, it was important to get the quarterbacks in that first group so we can start their clock right away and get them on the field and keep them healthy,” Judge said. — Jordan Raanan

Broncos OLB Bradley Chubb, who tore his left ACL in Denver’s Week 4 loss to the Jaguars last season, was asked Friday if he would be ready for this year’s season opener and he said: “No doubt, I feel like I’ll be ready to go.” Chubb added he will gradually do more and more when the Broncos do start their full on-field work in camp in the weeks to come. Coach Vic Fangio had said earlier this week that Chubb wasn’t quite 100 percent yet in his recovery, but “was pretty damn close.”

Washington running back Derrius Guice has suffered three knee injuries in his first two seasons and has yet to touch the ball more than 10 times in an NFL game. But he’s still one of the team’s most intriguing offensive players. In five games last season he averaged 5.83 yards on 42 carries. He also had a 45-yard touchdown on a screen pass. He must prove he can stay healthy; it’s a big question now. They still have Adrian Peterson; they signed third-down back J.D. McKissic and drafted versatile back Antonio Gibson. But if Guice stays on the field, he’s a big weapon. “I always tell him this, ‘the only thing you did this past year is you were an appetizer, I want the whole steak, I want the whole lobster, I want the whole thing,'” said Washington running backs coach Randy Jordan. — John Keim

Wasting no time! @JoeyB is ready to work. 💼 pic.twitter.com/a2chpP0SqB

Simba is ready to find his roar 🦁 pic.twitter.com/XNb19MliU5

safety is our number one priority. pic.twitter.com/oUK6rigpsV

Fields are painted. Sun is out. Only birds allowed on the field are @Seahawks #WeGotThisSeattle pic.twitter.com/bYqifZdGCK

A glimpse at what press conferences look like for the players this year 📸@MicrosoftTeams | #DUUUVAL pic.twitter.com/xKTakpkThY

Back where we belong 📍#FlyEaglesFly pic.twitter.com/7wvbiKHKaj