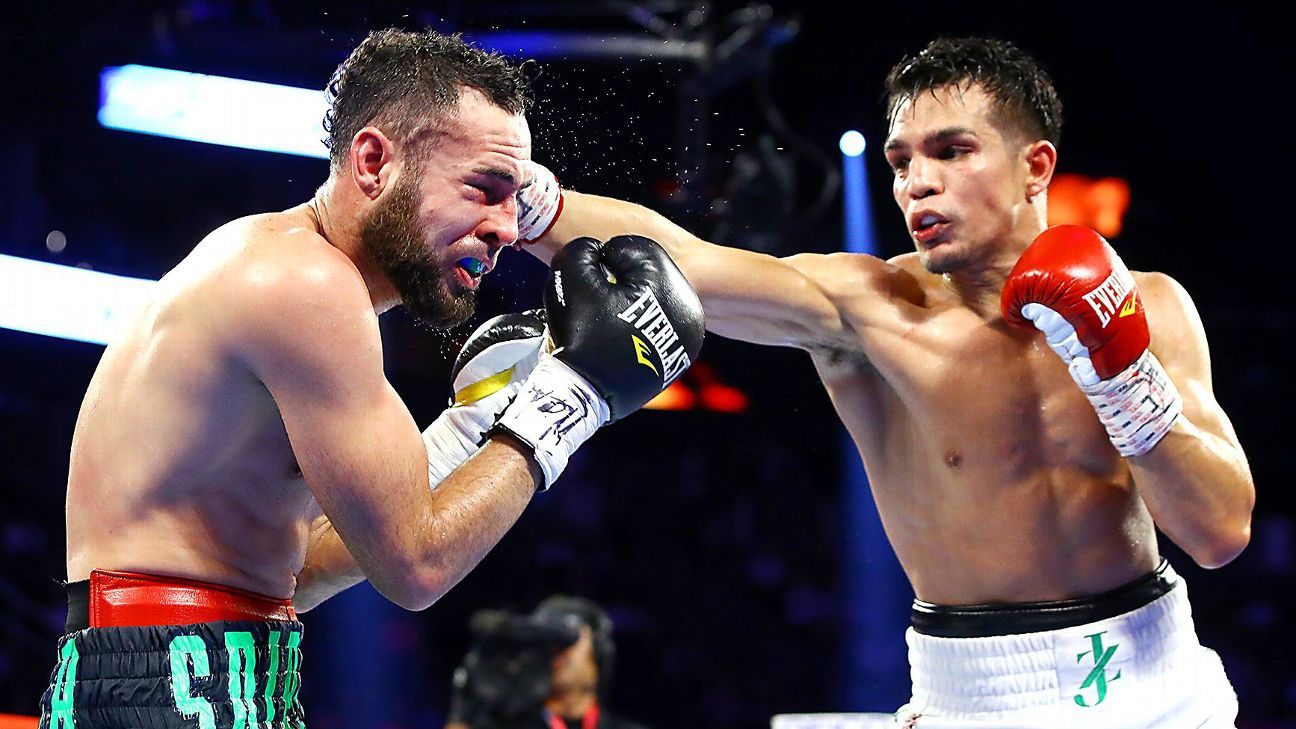 As we head into the home stretch of the first phase of “The Bubble” fights at the MGM Grand Conference Center in Las Vegas, let’s take a minute to appreciate what we saw last week.

Alex Saucedo won a 10-round decision over Sonny Fredrickson and put himself back on track for another title shot. Two-time world champion Jose Pedraza got back to his winning ways with a dominant performance against Mikkel LesPierre.

As we approach what was thought to be the meat of the Top Rank summer schedule, though, we’ve hit a patch that was a stark reminder of how difficult it has been to keep fights in place. Positive coronavirus tests were to be expected in this moment in time, but training camp injuries and positive drug tests don’t magically stop in the meantime. The reasons for the ever-evolving bout sheets have run the gamut, to be sure.

Top Rank Boxing is on ESPN and ESPN+. Subscribe to ESPN+ to get exclusive boxing events, weigh-ins and more.

Tuesday night’s main event features Jose Zepeda and Kendo Castaneda in a scheduled 10-round junior welterweight contest. Zepeda was scheduled to face Ivan Baranchyk, but Baranchyk withdrew because of an injury sustained during training. On Thursday, heavyweight Jerry Forrest faces Carlos Takam, with Takam replacing Jarrell Miller, who once again tested positive for performance-enhancing drugs and scuttled what was supposed to be his Top Rank debut.

The most entertaining stories of this Top Rank series center around boxers who are making the most of the opportunity to fight as often as they can during these unique times. Kingsley Ibeh notched his second win in seven days, and this week, Gabriel Muratalla and Jared Anderson are each boxing for the second time in “The Bubble.”

Who will step up and announce themselves on Tuesday and Thursday? Let’s dig into the fights.

Preschool teacher Gabriel Muratalla (3-0, 3 KOs), made quite an impression in his first fight within the Top Rank “Bubble,” with a first-round stoppage of Fernando Robles. The bantamweight returns to action Tuesday against Sergio Lopez, and Muratalla hopes to continue his wave of momentum.

“People never believe me when I say I’m a preschool teacher and a boxer. It’s like two different worlds,” Muratalla said. “It’s like that Disney show ‘Hannah Montana’ — she has two sets of lives. I feel like that sometimes.”

Meanwhile, Jose Zepeda is back in action. He challenged Jose Ramirez for the WBC junior welterweight title in February 2019, losing the bout by majority decision. Zepeda won his most recent fight, against former two-division world champion Jose Pedraza, and currently sits in the top five of both the WBC and WBO rankings at 140 pounds.

In a deep division, Zepeda is ESPN’s No. 6-ranked junior welterweight, but he is the highest-ranked fighter on that list never to have won a world title. The only other loss of the 31-year-old Californian’s career came in 2015, when he fought Terry Flanagan for the vacant WBO lightweight title. Zepeda injured his shoulder during the second round and was forced to retire to his stool.

Castanedo vs Zepeda: It will be interesting to see if Zepeda has any kind of letdown because he isn’t facing Baranchyk as originally planned. Zepeda is considered a top-10 140-pounder, and this is a fight in which he can prove that by showing his class and defeating Castaneda, then moving on to bigger and better things. Zepeda by decision.

Lopez vs Vences: You get the sense that Vences is fighting for his future at Top Rank after losing to Albert Bell last summer. Lopez will have his moments, but expect Vences to fight with a great amount of vigor and win a hard-earned decision.

Before we move ahead to Thursday’s action, we need to look at something that occurred on a card late last month. On June 27, at the TV Azteca studios in Mexico City, WBC 130-pound world titlist Miguel Berchelt took care of Eleazar Valenzuela in six rounds in a non-title affair. Because the local commission was not present, all of the bouts on this show were counted as no-contests.

The blanket no-contest decisions aren’t even the most interesting part of the story. For some of these bouts, there were six judges in place instead of the usual three who are ringside, drastically altering boxing’s typical approach to scoring.

This card was overseen, in part, by the WBC.

“We have been doing, for two years, a system to evaluate the judges from home,” WBC president Mauricio Sulaiman said. “We get eight-to-10 judges to score championship fights, and we can evaluate their scoring, how they are doing. It’s a very good tool for training and evaluation. When COVID-19 came about and there were restrictions for opening sites without the public, then we thought about this system, this program being of help. These two cards in Mexico, we have used it with great success.”

For the Berchelt-Valenzuela fight, there were three judges who viewed the fight from the television studio away from ringside and three more who watched the fights from the United States remotely.

“We don’t know if this will lead to something else,” Sulaiman said. “[But] it’s much more difficult to get a controversial decision [when there are more eyes judging a fight]. The risk of a bad decision goes very low.”

As for this system being implemented for fights held in the United States, Sulaiman said, “It has to be 100 percent accepted by the local jurisdiction where the fight takes place.”

Mark Kriegel blasts Jarrell Miller for his third failed drug test, calling him a “cheater” and a “coward.”

Heavyweight Jerry Forrest was scheduled to face Jarrell “Big Baby” Miller, but that fight was taken off the board after Miller once again tested positive for banned substances. Last year, Miller lost millions of dollars when he failed three separate tests, as he was in line to face unified champion Anthony Joshua.

Even given Miller’s history?

“It’s because this would be like the last shot, I’m shocked in the sense that no way he’d test positive again,” Forrest said. “You know what I’m saying? Like, there’s no way you’re going to do it repeatedly, again and again, with millions and millions of dollars [on the line]. There’s no way.

“The only thing he had to do is keep clean,” Forrest continued. “When they told me, I was like, ‘No way.’ I still can’t fathom in my mind how you’re willing to take that chance, knowing the circumstances.”

Using PEDs in other sports can soil the reputation of a player and the sport as a whole, but the implicit dangers are far greater in a combat sport, in which the goal is to inflict physical damage on your foe.

“I told people before: You look at it how I look at it, you’re talking about a guy that’s purposely cheating. This isn’t a sport where you can cheat, and it won’t hurt anyone,” Forrest said. “You’re talking about one legal blow to the head, one good blow or one illegal blow to the head, and it comes from a steroid user, and that kills someone. To me, that’s attempted murder.”

The reality is that Miller is far from the only offender. He just got caught — again. The current system of drug testing in boxing has too many loopholes and is not consistent enough during noncompetition cycles.

All Forrest is focused on right now is getting past Takam. He’s on a good run, having won 19 of his past 20 bouts, and he has an opportunity to boost his long-term career prospects with a win over an established heavyweight. Beyond that, Forrest is relieved to still have a fight on the calendar.

Catching up with: Jared Anderson

On June 9, Jared Anderson stopped Johnnie Langston in three rounds in the opening night of bouts inside “The Bubble.” He makes his return Thursday versus Hector Perez.

The heavyweight hopeful from Toledo, Ohio, is blunt about what it has been like to run through the gauntlet of the protocols and regulations in place in order to stage fights at the MGM Grand.

“Ugh, it’s like a punishment,” Anderson said. “I’m just not used to sitting in one place for too long. I was diagnosed with ADHD as a kid, so I move a lot. To sit in one spot for too long, it’s irritating for me.”

The 20-year-old Anderson is a personable sort and loves an opportunity to soak everything in on a fight night. Under usual circumstances, he’d mill around the lobby of the fight hotel and mingle with the boxing crowd. For fights in the bubble, though, Anderson has been resigned to playing his PlayStation 4, and with the hotel WiFi, he has had trouble playing against his cousins online.

Fighters and their camps are basically relegated to the 12th floor of the MGM Grand, and they’re allowed to come to the convention center area only for fight-related activities and meals.

Still, it’s all about boxing, and for Anderson, the fight in June without a live audience wasn’t that much different from what he had been through the previous three bouts.

“It wasn’t really a difference because I do fight relatively early, so there’s no real crowd, a huge one, at least,” he said. “But it actually made it better because I could hear my coaches. I heard literally everything they said. That was a plus, but other than that, it was still just a fight.”

The next morning, Anderson returned to Houston and quickly went back to work. This time around, he’s better prepared for life in the bubble. He planned to rent a hotspot for his PS4, and that connection to the outside world through “Call of Duty: Modern Warfare” will certainly help.

Anderson said he is eager to step into the ring again, and he’ll go through whatever protocols it takes to do so, even if it means stepping into “The Bubble” again.

“Without a doubt,” he said.

Castro vs. Juarez: Juarez is as tough as they come, but Castro is a well-schooled technician who has very solid fundamentals. Castro’s accuracy and precision will be the difference as he wins a wide decision.

Takam vs. Forrest: We’re going with the mild upset here. Although Takam has the deeper résumé, age is a factor. He’s 39, and Father Time has a way of creeping up on guys in this sport. Look for Forrest to outhustle Takam over 10 rounds.