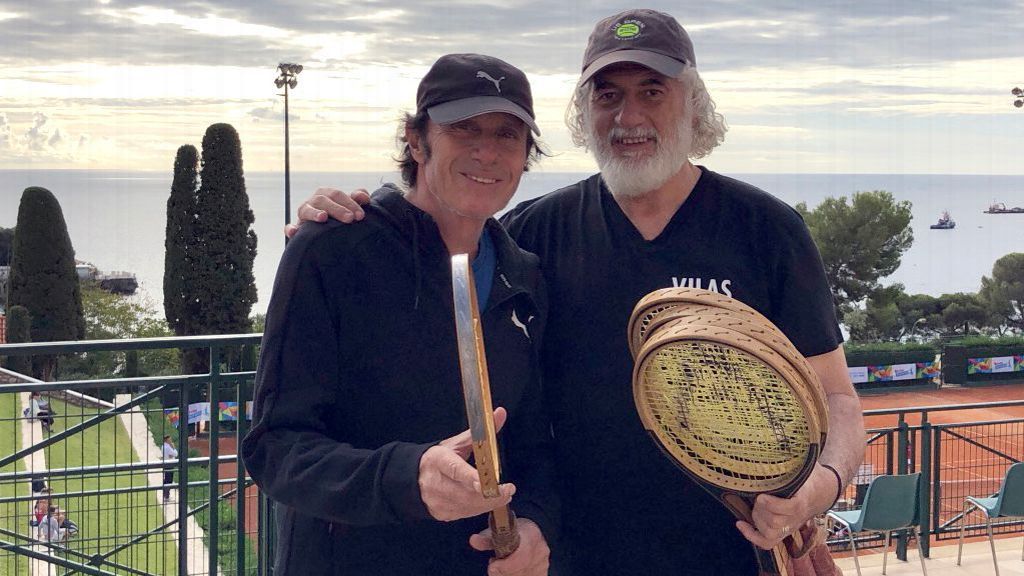 In 2007, the WTA announced that upon revisiting the rankings data for 1976, Evonne Goolagong — a multiple Grand Slam singles champion who had never reached the No. 1 ranking — should have been in the top spot ahead of Chris Evert for two weeks in 1976, officially altering the record 31 years later.

That was a life-transforming experience, less so for the Australian champion Goolagong than a 51-year-old journalist halfway around the world in Argentina, Eduardo Puppo.

“I took that [Goolagong decision] as a divine sign,” Puppo, now 62, explained in the course of long email exchanges with ESPN.com. “It was no longer time to sit back, but to take up the search.”

So Puppo set out to earn the same retroactive honor for his compatriot Guillermo Vilas, a Hall of Famer who played in eight Grand Slam finals, earning four titles, over an 18-year, record-shattering career that leaves him, along with Rafael Nadal and Bjorn Borg, among a Holy Trinity of clay-court tennis.

In the ensuing 13 years, Puppo and his main ally, Romanian mathematician and computer programmer Marian Ciulpan, amassed a formidable body of evidence (some 1,200 pages of documents, and a review of the 23,000 official matches played by the 1,117 pro players who were active at the time) to bolster their claim that Vilas was erroneously denied the No. 1 ranking on two different occasions.

The ATP investigated Puppo’s exhaustive research in 2015 and ultimately declined to act on the claim, without refuting it.

The Puppo team was as “devastated” as, reportedly, Vilas himself. Now 67 years old and living in Monaco in semi-seclusion due partly to health issues, Vilas in recent years has refused to discuss the issue. But last week, speaking to ESPN.com through Puppo, Vilas said: “I made my claims when appropriate, but no one listened to me. At one point I gave up, and that’s why I never spoke again. But years later, Puppo appeared and gave me hope.”

Vilas’ hopes may have been shattered, but not those of his passionate Argentine advocate. Puppo soldiers on. His team now includes a sports lawyer working on getting the case adjudicated in court. (The Puppo team is not seeking any financial award for Vilas or itself.)

The No. 1 ranking has become an obsession for Puppo, and the quest has exacted a toll.

“I am passionate about research,” Puppo wrote. “I knew that tracking No. 1 was a very complex and unpredictable goal, but I never thought it would take 13 years of my life and my family.”

Puppo explained that he “put aside weekend outings,” missed annual vacations and “narrowed” his relationship with his wife and three children. His family understood that the quest is part of his job (this is a man who spent 22 years writing a three-volume, 2,800-word history of tennis in Argentina) and accepted that seeking redress for Vilas gradually became an “emotional goal” too important for Puppo to forgo.

According to Argentine journalist Sebastian Fest, it was Vilas himself who first suggested that he had been robbed of his rightful place among former No. 1 players in an interview with Fest at the French Open in 2007.

Puppo, a passionate tennis fan and somewhat accomplished recreational player, first met Vilas as a rookie journalist in 1980 and, over the years, interviewed him many times. He described his relationship with Vilas in those early years as an appropriately formal one. “We were journalist and player, nothing more,” he said, adding that he didn’t even discuss his project with its subject for many years.

Fest, who recently served as the president of the International Tennis Writers’ Association, told ESPN.com that while Vilas is grateful and enthusiastic about Puppo’s efforts, their relationship has largely been professional.

The role of sports heroes like Vilas in Argentina helps explain why Puppo vanished down the rabbit hole. Argentines take fierce pride in their national heroes. It frustrates and stings many that while Vilas never officially held the top ranking, other, perhaps less deserving, men from rival South American nations did: Gustavo Kuerten from Brazil and Chile’s Marcelo Rios. To add insult to injury, Rios reached No. 1 without even having won a single major singles title.

“It is a topic that has the potential to interest the whole country,” Fest said. “If Vilas is given No. 1 in those times in 1975 or 1976, there will be no other topic that day that can match it. Front page of all the newspapers and congratulations from the president.”

Vilas remains an important national figure in Argentina. Nicknamed “Young Bull of the Pampas” for his strength and endurance (Vilas was flattered when he was described as “masochistic”), Vilas is also a poet and brooding, philosophical iconoclast.

In 2012, five years into his research, Puppo decided to honor Vilas. Puppo, who has also worked in various administrative and promotional capacities in tennis, hired an artist to create a life-sized iron sculpture of Vilas hitting his money shot, the renowned one-handed topspin backhand. The statue was ultimately installed at the entrance to the Mar del Plata Nautical Club in Buenos Aires, where Vilas got his start in tennis.

The following year, Puppo shared the full details of his effort with Vilas, who in 2014 asked Puppo to be his biographer. According to Puppo, the two met at Vilas’ home 96 times to conduct interviews and research a book that is 600 pages long and counting.

“I continue to perfect [it] today,” Puppo said. “It is Guillermo’s story and a summary of all the research into the rankings matter. All this brought Guillermo closer to me.”

To a skeptic, it may sound like Puppo was bewitched by the power of Vilas’ personality and celebrity. But the body of evidence compiled by Puppo’s team is convincing, and Fest confirmed that he is taken seriously and admired by many. “He [Puppo] is not a groupie at all, he’s a professional. He has a passion for tennis and the conviction that when it comes to Vilas, there is a case there.”

Puppo’s argument is a compelling one. He says his research shows Vilas was unjustly denied the opportunity to eclipse No. 1 Jimmy Connors in the rankings in two specific periods (five weeks beginning on Sept. 22, 1975, and the first two weeks of 1976) because the ATP did not publish rankings in the weeks when Vilas was on top, times that Puppo characterizes as “blank weeks.”

During that dawn of the computer era, the ATP published rankings sporadically (just 11 times in 1974 and 13 times in 1975). It was partly because the rankings, based on a player’s average performances, were seen mainly as a guide for entry and seeding in tournaments, and partly because the ATP simply lacked resources.

“People played with the rankings a lot then, because it was based on an average of a player’s performances,” Jose Higueras, a two-time French Open semifinalist and rival of Vilas, told ESPN.com. “Jimmy [Connors] and Bjorn [Borg] knew how to keep their rankings high. If you played smaller events, your ranking could only go down. There were times when I knew I could win a $75,000 tournament and my ranking would go still down, not up.”

The gap between Sept. 16 and Oct. 29 was unusually long, lasting 43 days. That’s the time frame during which, according to Puppo, Vilas would have first been ranked No. 1. But as no rankings were published, Connors retained the honor.

Given the purpose of the rankings, there was really no talk about the top guy until the very end of the year, when a number of experts and panels weighed in with their own, subjectively generated, year-end rankings — much like the NCAA once crowned its No. 1 football team by vote.

An even more striking anomaly occurred later, in 1977, when Vilas put together one of the greatest years ever yet was denied both by the computer and most of the year-end “expert panels.”

In 1977, Vilas won 16 titles (by contrast, Roger Federer won 12 in his most prolific year, 2006) and amassed a record 53-match clay-court winning streak that has since been eclipsed only by Nadal.

Vilas won major titles at the French and US Opens that year, and he was runner-up at the Australian Open. Yet Connors still ended up on top in the final rankings issued by the ATP despite failing at the majors and losing to Vilas both times they played in 1977, including in the US Open final. His record of 69-11 with eight titles pales in comparison to Vilas’, but the ranking system still worked in Connors’ favor.

Puppo’s research uncovered numerous errors and omissions in the official ATP record. Vilas, who had complained bitterly about being denied access to the official ATP records for that year, felt vindicated. Based on Puppo’s investigations, the ATP retroactively gave Vilas credit for three clay-court titles (bringing his career total to 49; only Nadal has won more) that were originally misidentified by surface.

But that was about as far as the ATP was willing to go after a comprehensive 2015 review of Puppo’s research. Chris Kermode, then the ATP’s chief executive, made the call to ignore Puppo’s work, admitting that while mistakes existed in the “official” record, awarding Vilas the top ranking retroactively would be too disruptive. Kermode warned that it would create a chain reaction of claims and challengers to the various records.

“It’s a huge deal for a player, so we haven’t done this or taken this lightly at all,” Kermode, himself a former pro player, told The New York Times after dismissing Puppo’s claims in 2015. “But at some point, that’s the call we have to make. … Rewriting history is impossible.”

Puppo, who said he was “deeply saddened” at the time of the ATP’s decision, still believes its response was “insufficient,” given the scope of his research, and emphasized that the ATP has never been able to refute his work yet does not want to face the truth.

Puppo responded to a conciliatory email from Kermode, writing: “No, we are not rewriting the story, that is impossible. The story is unique. We are writing the missing part of the story. The full story. Otherwise it is better not to tell it, because it is lying to those who starred in it.”

Many still remain uncomfortable with the idea of giving a player something seemingly earned in the past by another player.

Higueras believes Vilas was certainly the top player in 1977 and would like to see that recognized. “But,” he said, “I would never change the rankings, even if the data is incorrect. Then Connors could come back, saying he would have played more if he knew. … It becomes difficult.”

So Puppo’s quest continues. His once dark, long hair has turned into a wild nest of silver and white curls. At times, he sports a beard worthy of a department-store Santa. The rewards for his efforts have been scarce. Leaving for Monaco in 2016, Vilas entrusted all of his sports material for Puppo to curate as he wished.

“I always trusted Puppo and his team; they are professionals and meticulous like me,” Vilas said. “I feel [supported]. Eduardo became a brother to me. My family and I love him and we are grateful for everything he does in a selfless way.”

Puppo is proud that he has earned Vilas’ trust, but it rankles him that he can’t be the warden of an even more valuable possession: the No. 1 ranking that he believes Vilas earned but never really got.