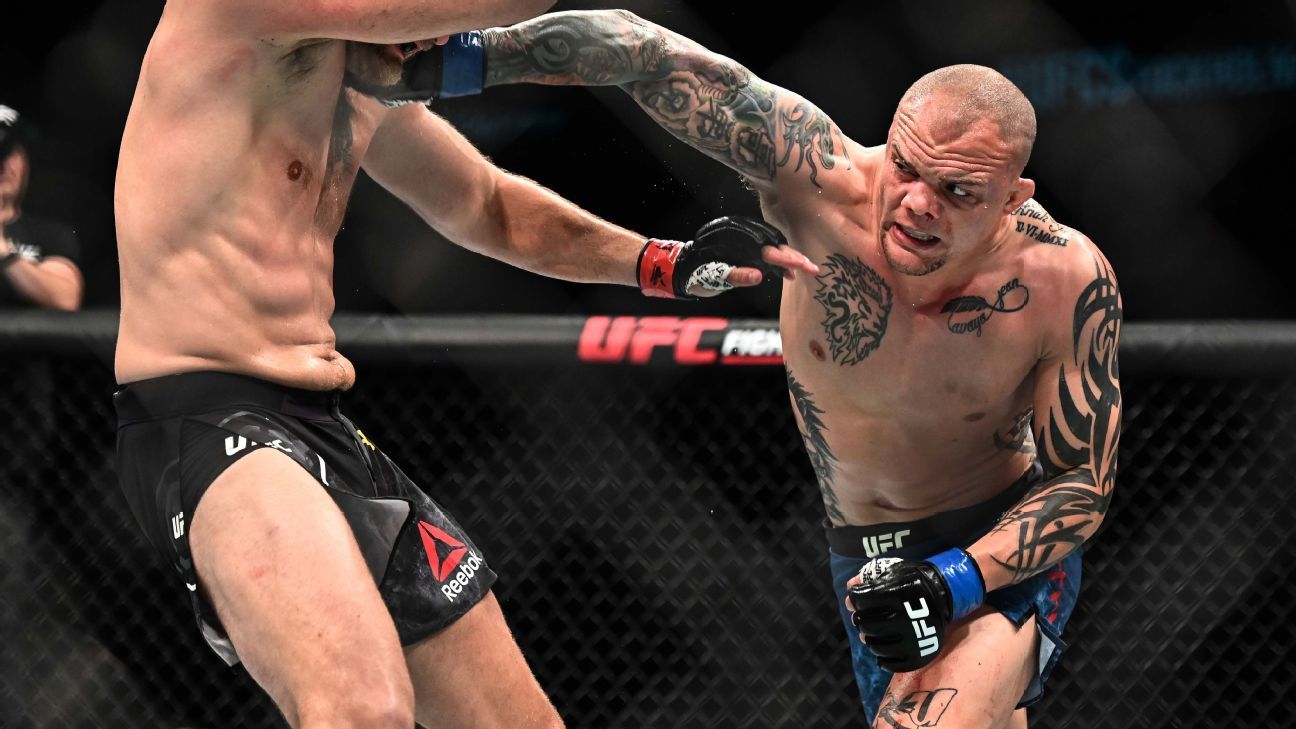 A man has been charged after he entered the Nebraska home of UFC fighter Anthony Smith unlawfully early Sunday morning, according to police.

Luke Haberman was arrested and charged with first-degree criminal trespass, a misdemeanor, according to Sgt. Wayne Hudson of the Douglas County (Nebraska) Sheriff’s office.

Smith said in an interview with ESPN’s Ariel Helwani on Monday that he woke up just after 4 a.m. local time Sunday to a stranger in his Omaha-area home. The UFC light heavyweight said he tried to subdue Haberman for more than five minutes while waiting for the police to arrive.

Haberman did not steal anything, Smith said, and it was unclear why he was in the house. Smith and his family — he lives with his wife, mother-in-law and three daughters — were not injured. Smith described the incident as “terrifying” and called it “one of the toughest fights” he has ever had.

Smith said his wife woke him up and told him there was a man in the house. Smith said he could hear a “man’s voice screaming at the top of his lungs.” Smith left the bedroom, turned a corner and saw Haberman in a computer room.

Smith said Haberman walked toward him and it seemed like he was trying to scare him. Smith was concerned the man had a weapon. Smith said he tried to take him down and the two began fighting.

“I didn’t know what he had,” Smith said. “Typically people don’t break into your house in the middle of the night for any good reasons. I’m expecting that I’m gonna hear a gunshot or he’s gonna stab me. Like he’s got something. I figure I’ve got about two minutes before whatever he’s got takes me out.”

Smith said his main goal was to protect his family. His wife gathered the children and took them to a bedroom and closed the door. Smith fights at 205 pounds and walks around heavier than that. Somehow, he said, this man who weighed around 170 pounds was still coming at him, an elite UFC fighter, for minutes.

“No normal human is able to fight like that,” Smith said. “I’m by no means the baddest dude on the planet. But he’s a regular Joe and I had a hard time dealing with him. And he took everything that I gave him — every punch, every knee, every elbow. He took every single one of them and kept fighting me.”

At one point, Smith said, his mother-in-law brought him a kitchen knife, which he held to Haberman, who continued to fight him, Smith said.

When the police arrived, officers were able to subdue Haberman, Smith said. He said there was blood all over the computer room and Haberman was cut up and had swelling on his face.

According to Smith, Haberman told him, “Hey man, I’m sorry” as he walked by after things calmed down.

Smith said he experienced a wide range of emotions afterward, including anger and then fear that someone had targeted him. He no longer thinks that’s the case, but there is confusion about what the man wanted. Smith said his neighbors had video footage of Haberman trying to enter their homes, and he succeeded in entering another home before being scared away.

He entered Smith’s home through an open garage door.

“I’m not lying when I said it was one of the toughest fights I’ve had in my whole life,” Smith said. “I went into that fight ready to die. Nobody smart breaks into a house in the middle of the night unarmed. … When they break in at night, it’s to hurt people.”

Smith said he felt like if he didn’t try to subdue Haberman with force, he could have harmed his wife, mother-in-law and daughters. He said he feels like it was better it happened to him than anyone else on the street, given the fact that he’s a pro fighter. But Smith said in that moment there was no way to be prepared for a fight.

“You always just think you’re such a bad ass,” Smith said. “I just don’t feel like one. I feel … insufficient a little bit. I didn’t know it was possible to be that terrified.”

Smith is scheduled to fight Glover Teixeira in the main event of UFC Lincoln on April 25 in Nebraska. The event is likely to be moved to another location due to the coronavirus pandemic. Smith said he will still compete despite those scary moments Sunday morning.

Precautions will be taken to keep his family safe in their home, including utilizing a security system.

“I gotta do what I gotta do,” Smith said of fighting April 25. “I’ve got a job I’ve gotta take care of. Glover is still good to go. He’s still in. He’s training, he’s ready.”