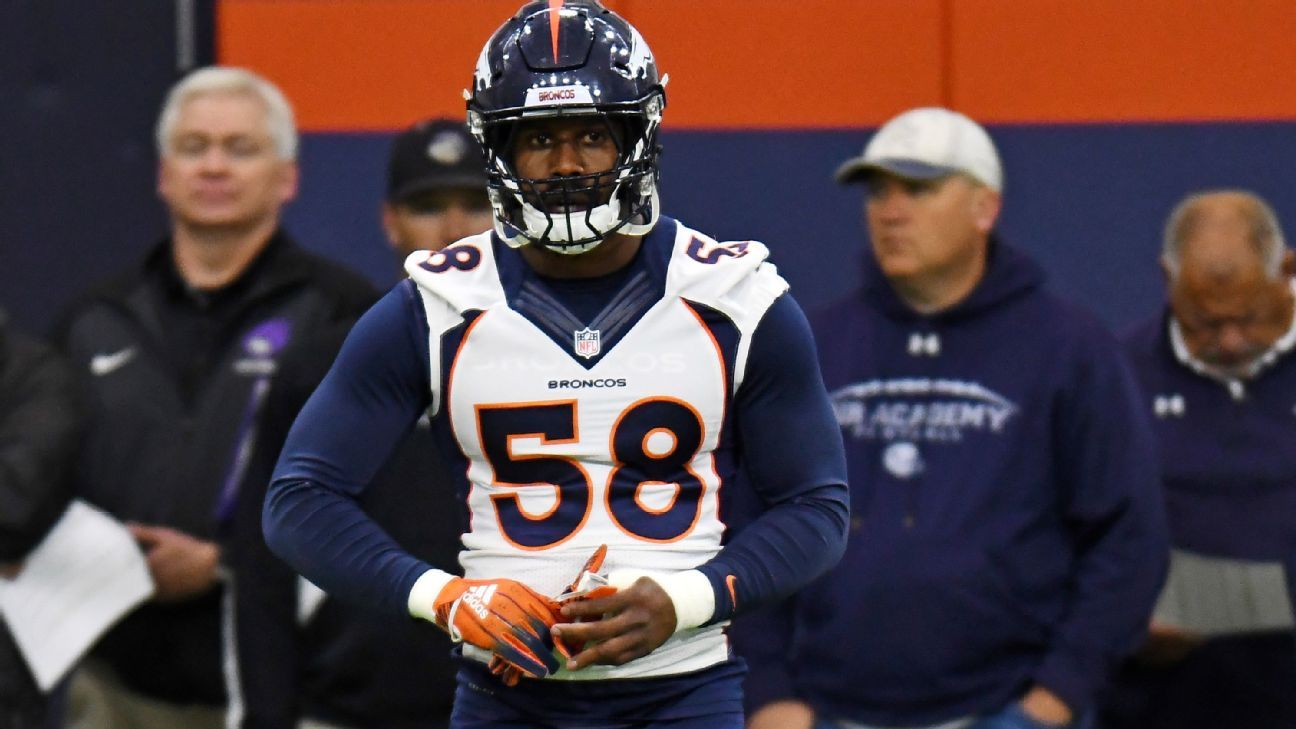 ENGLEWOOD, Colo. — On a day when Denver Broncos linebacker Von Miller was just one of eight players to unanimously be selected to the All Decade team for the 2010s, Miller said he was both honored and focused on still achieving two things that have eluded him so far in his career.

He said Monday he believes at age 30, heading into his 10th season, he can lead the league in sacks and have a chance to be the Defensive Player of the Year — two things the former Super Bowl MVP and eight-time Pro Bowl selection has never done.

“I really feel like some of my best ball is coming up,” Miller said. “Winning the Defensive Player of the Year and leading the league in sacks is attainable with the team I have, the people I have around me. I’ve just got to take advantage of the opportunities, I have go get it.”

Miller had a streak of five consecutive seasons of double-digit sacks end in 2019 when he finished with eight. The team’s defensive struggles at times, especially after Bradley Chubb suffered a season-ending knee injury in Week 4 and defensive end Derek Wolfe eventually finished the year on injured reserve as well.

This offseason the Broncos made trades to acquire a five-time Pro Bowl selection in the defensive line in Jurrell Casey and also trade for cornerback A.J. Bouye, who has been named to one Pro Bowl in his career.

On the prospects for the season, with the draft still to come, Miller said Monday: “On paper it looks like a great one … I’m pretty excited about it.”

Miller was often visibly frustrated last season as the Broncos, even with a 4-1 mark down the stretch finished 7-9. He often let his aggravation with what became the team’s third consecutive losing season and fourth consecutive playoff miss bubble over, especially after two lopsided losses to the Chiefs when the Broncos were outscored 53-9 combined.

He promised at season’s end he would start training almost immediately for the 2020 season, which he did posting workouts on social media just days after the season.

Miller has always said “winning games” was his ultimate goal and that he didn’t want his Super Bowl 50 MVP award “to be my high point.” That if he is on track to lead the league in sacks and being in the conversation for the Defensive Player of the Year award, the Broncos will also be winning games.

“I feel like sacks and Defensive Player of the Year award go together, I believe lead the league in sacks they go hand in hand,” Miller said. “It was about sacks before and it’s about sacks now, about sacks, winning games, coaching some of these young guys now.

NCAA offers plan for athletes to return to campus
USGA: ‘Sole focus’ is U.S. Open at Winged Foot
Sources: Baranchyk-Zepeda booked for July 7
The biggest questions for all 24 teams remaining in the NHL playoff mix
Woodley on UFC return: ‘I’m as focused as I’ve ever been’